Honey bees and the specter of CCD 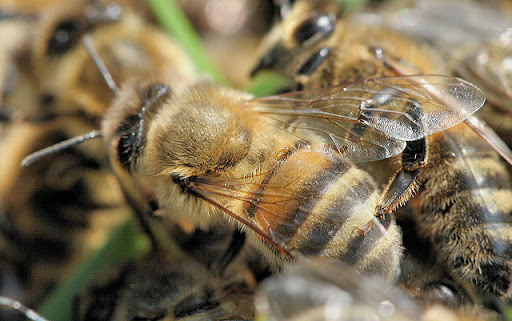 Outside the Marsh Room, tucked at the end of a long hallway, hundreds upon hundreds of bees swarm inside the Cape Cod Museum of Natural History’s observation hive. Female workers produce thick wax and regulate the honeycomb’s temperature. Male drones, housebound and defenseless without stingers, stand ready for fertilization. And the queen (marked with a white dot on her thorax) lays over 1,500 eggs per day. It’s an incredibly efficient system despite its complicated social hierarchy. Individual bees aren’t particularly smart, but the aggregate hive is. Each bee follows simple rules, performs specific tasks, and acts without knowledge of the big picture, all of which allows the group to adapt quickly to environmental threats.

But what happens when an entire swarm decides, disastrously, to fly away all at once without explanation? The phenomenon of sudden hive abandonment is known as Colony Collapse Disorder (CCD) and the first alarm bells went off in early 2006. Beekeepers in the Midwest went outside and found their honeycombs turned into ghost towns. By autumn, similar reports surfaced nationwide. Some commercial producers lost up to 90% of their populations. Left unchecked, the consequences of widespread CCD would be disastrous for the U.S. agricultural economy. By most estimates, honey production is a $15 billion business, not to mention the various fruits, vegetables, trees, and other crops that depend on the bees for pollination. The precipitous decline was the subject of the 2009 documentary Vanishing of the Honeybees, narrated by Ellen Page.

Why do seemingly healthy swarms fly away? Theories abound, but none of the usual explanations account for a nationwide plague. Finally, some of the pieces may be falling into place. A new study from San Francisco State University, published this month in Public Library of Sciences One, identified a parasitic organism called Apocephalus borealis that causes the self-destructive behavior. The fungus had been previously observed in African bumblebees, but not in North American honeybees. Apocephalus borealis attacks the bee’s brain and destroys its functional capacities, consuming it from the inside out. An infected bee doesn’t die right away, however. Instead, it moves absent-mindedly and sluggishly without the ability to navigate properly. The parasite may actually manipulate the bee into flying away in order to give itself an opportunity to invade new populations. Similar diabolical fungi have been shown to affect ants in Thailand and caterpillars in American forests.

If Apocephalus borealis is indeed the culprit in CCD, the infections may be partially due to pesticide usage. Tests at the Bee Research Laboratory in Beltsville, Maryland recently demonstrated that exposure to trace amounts of imidacloprid (commonly used for termite control) lowers the bees’ immune systems, leaving the hives vulnerable to hardy strains of infection.  The links between the fungus and the pesticide are still being worked out, but the overlapping effects of the two factors will almost certainly make it more difficult for researchers to isolate each variable. There is still no definitive diagnosis for hive collapse, but this new research gives scientists several promising avenues to pursue.

Since CCD’s appearance, amateur and commercial beekeepers alike have responded to the threat quickly.  National media coverage has drawn focus and resources to the cause. After significant dips from 2006-2009, the number of U.S. honey-producing colonies stabilized somewhat at 2.6 million in 2010. Domestic honey production (in pounds) also rebounded to 2005 levels.  So far, Massachusetts has been spared the worst of CCD. The state’s amateur and commercial beekeepers hope to keep it that way.

On March 31st, the natural history museum will host Professor Tom Seeley for a presentation on “honey bee democracy.” Dr. Seeley is a biologist at Cornell University, author of three books on swarm intelligence, and a preeminent expert in the field. He even has a species of bee named after him (Neocorynurella seeleyi). It’s sure to be an illuminating discussion about some of the Cape’s most fascinating residents.